The cycling community in the Lake Norman area has had a rough time already this year and we’re not 2 months in. A local cycling legend (friend, husband, father, brother, and grandfather) was killed by a careless driver, in my opinion. Life threatening injuries were sustained by another well-loved and talented young local cyclist, struck from behind by another careless driver, while training for his debut to professional cycling in Europe. These senseless crashes are just that… senseless.

These are just two of the cyclists who were either hit, killed, or threatened in some way by angry or distracted motorists over time. There are certainly others and our hearts go out to anyone that has to endure anything like this while doing what they love. We live in a world with a lot of distracted and careless people that only have one thing on their minds… themselves. Unfortunately some people put more value on two or three minutes of their time than they do on a stranger’s life and it can cause extreme hatred towards anyone in their way. In extreme cases, there are those rare people that dislike you for the simple fact that you’re riding a bike on the road even if you’re not holding them up.

Sometimes it takes a tragedy to get action. It’s a shame but we can make sure our friend’s deaths and injuries are not in vain.

Following the death of one of our local cyclists, a group of people came together to form an advocacy group (official name TBD). This group includes local cycling group presidents, town planners, bike shop owners and cyclists. Together we have been working hard to bring safety to our streets. Not only for cyclists but all users. We’re focused on changes that can be implemented in a short time. Changes to roadways take years and we don’t want to wait that long.

On February 5th our group met with police officers from Mooresville, Davidson and Cornelius at the town hall in Mooresville. We had a very productive meeting and the officers from these three towns are very interested in helping keep people safe regardless of the number of wheels you put on the road. A couple items we discussed were:

We plan to continue these open discussions on a regular basis and hope to bring in more local towns to join us.

One of the first things we did was to make sure we were heard and we continue being heard. A total of 15 to 17 cyclists attended city council meetings in January and spoke during the public comment sessions in Mooresville and Davidson. We encourage you all to attend these meetings that are open to the public as a show of support and if you have something to say as a cyclist, please do so. The more we’re seen and heard in our communities, the more attention and steam our cause collects. We shouldn’t have to and don’t want to give up a hobby we love because of a small percentage of careless drivers.

Keeping Up To Date

We will post an update like this on a regular basis to keep you informed of what this advocacy group is going and to let you know what you can do to help as well.

Remember riding your bike when you were a kid? It was so freeing. The wind in your face and the feeling of getting somewhere so much faster. I spent a lot of time on my bike as a child. Once I got my driver’s license I never touched my bike again though. I was doing “grown up things” then.

It wasn’t until I was in my mid 40s that I got on another bike on a regular basis. My son got a job at a local bike shop and that was the spark that got me back on a bike. My first bike was a mountain bike and I was lighting up the local trails. Yes, “lighting up” is a relative term. After a year or so on the trails I started getting interested in some group road riding with that bike shop. I would take my big heavy mountain bike out on the road and did pretty good keeping up with the roadies. Sure, it was a D group but I didn’t know what that meant at the time.

I had no idea what I was doing on those first road rides. I was also not comfortable wearing the funny outfits. I stuck to my MTB shorts and loose fitting jersey’s. Well I quickly learned why people wear the cycling kits and it wasn’t too long before I was part of that club. Try riding 30 miles with a regular pair of shorts. I’m not even referring to the chamois but more just the legs of the shorts rubbing your legs every time you pedal. I would be so chaffed I could barely walk.

I was fortunate to have a lot of friends that I worked with at the time that were avid cyclists and they would ride at lunch several days a week. They encouraged me to join them and to this day I laugh at how long these guys would have to wait on me to catch back up. Never once in all the times it happened did they complain about me. They always encouraged me and made sure I knew it didn’t matter. Over the years I’ve learned this was more than just having great friends, this is pretty much the status quo for cyclists. Most cyclists I know are happy to hang back and/or wait for a slower beginner rider if it means they’ll ride. Not all cyclists are like that but most are. I always worried that I was holding them up and it bothered me even though they continuously told me it was fine. It wasn’t until I became a faster rider that I realized it really doesn’t bother cyclists to ride with slower riders. It’s a new year and if you’ve been thinking about getting out to ride, try a group ride with some friends or a local cycling club and don’t worry about your speed. Keep in mind, the more you ride, the faster you get too.

We all do it– the internal monologue cuing us through our pre-ride cycling checklist.
Helmet? Check.
Tire pressure? Good.
Food? Of course.
Water? In this heat, you know it.
And the list goes on.

So you may think you’re ready to go, right? Well not so fast.

When we all buy our first bike, we do a little research as to the basic needs of cycling–chamois, helmet and perhaps some gloves and sleek sunglasses.
That is until you see someone with a really cool looking kit. So you buy a really cool looking kit.
Then we see people “clipping in”, so we head back to the shop and buy shoes, cleats and pedals to match.
Then we go on our first group ride and notice all the fancy lights, computers and other gadgets. Add those to your wish list.
Now that we have all of this great gear we realize it doesn’t look so good on this starter bike, so now we go shopping for a carbon bike. At this point, we are extreme cyclists.
Amidst all these cool gadgets, what tiny thing have we forgotten? The basics to fix a flat.
I rode this weekend with a couple of experienced cyclists in the middle of nowhere Georgia. We were in a terrific area for cyclists–no cars, no homes, nothing to bother us until someone got a flat. “No problem” you may think, an experienced cyclist knows how to quickly flip the bike over, remove the wheel, take the flat tube out, check inside the tire for something that may have caused the flat, put the new tube in and simply add air. Very simple, right?  Simple if you have air.
Unfortunately, this experienced cyclist didn’t have air. Not a huge problem as another rider pulled out their cartridge of air, unfortunately most of the air was gone. Now what?
Fortunately, I had three canisters of air. We filled the tire and finished our terrific ride.
So the takeaway?
Even some of the most experienced riders who have all of the latest gadgets sometimes forget to have the basic essentials. Even for our new riders who may have those essentials, will they know how to fix a flat?
For our experienced riders, make sure before you head out to have a couple spare tubes (perhaps one or two more for longer rides or those that cross into rough terrain), a few cartridges (16g cartridges typically have just enough air to fill most 700c tires with enough air), a valve so you can puncture the cartridge and fill your tube OR a frame pump (for those who don’t want to carry around cartridges all the time).
Want to learn how to fix a flat in no time? Check out this great step-by-step video here 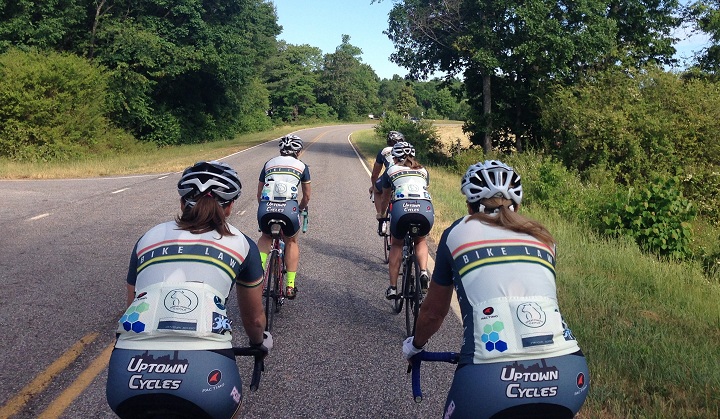 BikeWalk NC has released the first part of its education initiative to promote best practices for group bicycling. The first installment, Skills and Techniques, is now available as an online guide. It covers cooperative bicycling, applicable traffic laws, group size and formation tradeoffs, paceline techniques, and safe negotiation of intersections and road hazards. Future releases will include Part II: Organization and Leadership, and additional media formats such as handouts, cards, and videos.

The objective of BikeWalk NC’s group bicycling best practices project is to inform cyclists, police, traffic engineers, transportation planners, motorists and legislators of safe and effective practices for group travel by bicycle. Our intent is to improve the safety and comfort of group rides and to use greater public knowledge to discourage onerous and even dangerous regulatory legislation and enforcement being proposed by those who do not understand group bicycling. This project is a collaborative effort of highly experienced group ride leaders, organizers and participants from across the state. Special thanks go to the Carolina Tarwheels, the North Carolina Bicycle Club, Bike Law North Carolina, WeeklyRides.com and The Peloton Project for their contributions to Part I.